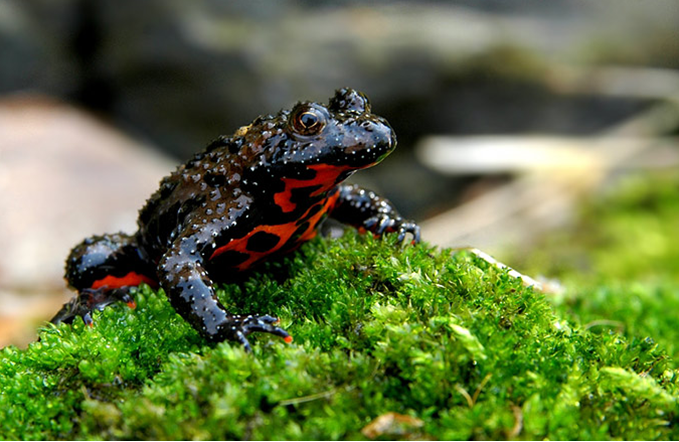 The Fire Belly Toad may also sometimes be called the Fire-Bellied Toad, although they are really a frog.   These ornate little creatures originate in northeastern China, southern Japan, Korea, and southern Russia.   These frogs are very fond of the water and most often are found in slow-moving ponds, streams and rivers.   The Fire Belly Frog hibernates from late September to May, usually in leaf piles, rotting logs, and occasionally at the bottom of streams.

These little frogs are a green or dark brown color with little warts on it\’s back and a red or yellow and black pattern on the belly.   These bright colors are a warning to possible predators that this frog is toxic and foul tasting.   The Fire Belly Toad secretes toxins from glands behind the head.   In fact, when held in captivity, these toads   should not be housed with other frogs or toads due to the toxic build up in the habitat would be fatal.   The toxic build up may even be to much them and for this reason, it is extremely important to do very frequent water changes in their habitat.   They are not toxic to humans, but any handling should be kept to a minimum and followed by a good hand washing.

The Fire Belly Toad can live up to 12 or more years in captivity.   They can be very aggressive with each other, especially when several males are housed together. These toads are best known for their mating call, which sounds much like a barking dog.