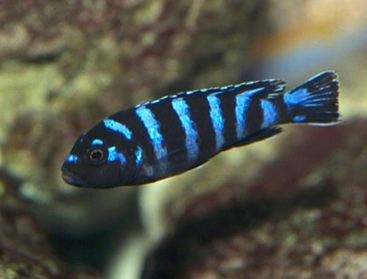 African cichlids   (pronounced sick-lids), come from three lakes in Africa: Lake Malawi, Lake Tanginika, and Lake Victoria.   They are part of a large family of freshwater fish.   These creatures can easily adapt to new environments and geographic locations.  Today, they are a common prized possession in many aquariums and adored for their coloration.

They are amongst the most diverse and specialized group of fish in the world. There are estimates of about 1300 or more species of this kind of fish, with a staggering number of color and size combinations.   In fact, no other group of freshwater fish are more colorful than African cichlids. Their beautiful colors and patterns represent more than just beauty.   Cichlids often express timidity and dominance through their coloration: a pale fish could be a stressed or submissive fish, and a bright fish is usually an aggressive or dominant fish. Sometimes when a male loses his territory, he also loses his bright coloring.

African cichlids are highly predatory and extremely territorial. They will often live together in groups or schools of like species. In fact, they are often found in large â€œcrowdedâ€ groups of up to 10-18 fish per square meter.   Mature cichlids guard their territory and they are not hospitable and may even behave aggressively to other fish, including cichlids of different species.

Female cichlids carry her eggs and young in their mouths. Once the eggs have been fertilized, the female will pick them up, and incubate them in her mouth for a period of 3 weeks to 31 days, depending upon the species. Even after the young have been released, the mother will frequently take them back up into her mouth when they are threatened.