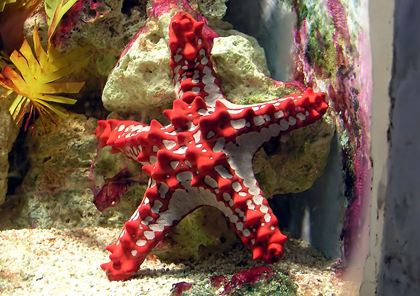 The African Red Knobbed Sea Star has multiple red knobs throughout the body. These red knobs are connected to each other by a surfacing red cord-like, wiry material which make the starfish look like a grid.   Typically, these starfish have five arms but there have been specimens found with more than five arms.   At the tips of each arm, they have eye spots which only allows to determine light from dark.     These starfish have the capability of regenerating a lost arm.   However, regeneration is a lengthy process and the animal lives in constant jeopardy of infection and predation.   Starfish do not have brains and have filtered sea water for blood.   They use tiny tubular feet with suckers to move around the ocean floor.

These peaceful creatures will eat anything they can catch, including soft corals, sponges, tube worms, clams, other starfish, and various invertebrates.   All starfish have two stomachs.   The cardiac stomach is at the very center of the African Red Knobbed Sea Star and helps with eating mollusks like clams and mussels. Once the starfish has a clam in its arms, it pries the mollusks shell open and release its stomach into the shell. The stomach has very strong digestive juices that kills and liquefies the animal inside the shell. Once the mollusk is dead, the stomach sucks up the animal, brings in its stomach, and leaves the empty shell on the ocean floor.