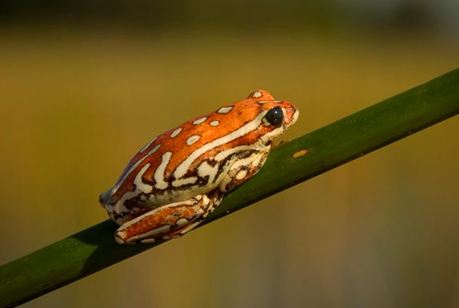 The African Reed Frog is native to Somalia, Kenya, Tanzania, Mozambique, Malawi, Zimbabwe and South Africa.   Typically, these tiny frogs live in trees, low bushes and grasses, but some species will also live on the ground.   These frogs are almost constantly perched on reeds or other vegetation, hence the name, Reed Frog.

The African Reed Frogs are highly variable in color and pattern.   However, males are usually green and females usually reddish with small, bright spots. They show their best coloring under the sun.   These little frogs do not get much bigger than 1 to 3 inches in length.   They have sticky toe pads and cartilage between the last two bones of each toe that makes their toes more flexible.   This is the only species of frog that can change their sex from female to male when there is not enough males in the population.   The African Reed Frogs are well known in their native countries for their characteristic melodic voices.

Although these creatures are tiny, they have huge appetites.   Like most frogs, these animals feed on most any insect that is the size of their head or smaller. They are able to capture their prey using retractable sticky tongues.