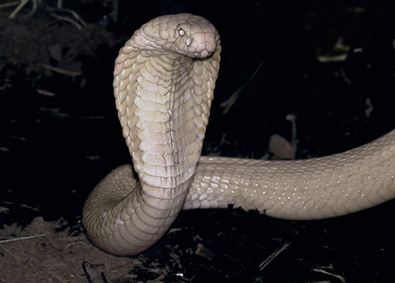 Monocled Cobras are distributed from India in the west through to China, Vietnam and Cambodia, also occurs in the Malay Peninsula and is native to Bangladesh, Bhutan, Myanmar, Laos, Nepal, and Thailand.   They prefer habitats associated with water, such as, swamps, and mangroves, but can also be found in grasslands, shrublands, and forests.

The Monocled Cobra has an O-shaped, or monocellate hood pattern.   The young are born in various colors, but become lighter as they age, usually to all white.   Adult monocled cobras reach a length of 4.5 to 7.5 feet. Many larger specimens have been recorded, but they are rare.

This is a mainly terrestrial species, but some have adapted to water, becoming semi-aquatic.   Although they are known to be nocturnal, they are also found basking during daytime.   Often found in tree holes and areas where rodents are plentiful. It tends to head for cover if disturbed.   When threatened, they will raise the anterior portions of their bodies, spread their hood, usually hiss loudly, and strike in an attempt to bite and defend themselves.   Adults eat small mammals, frogs, toads, and occasionally snakes and fish.

The Monocled Cobra is a highly dangerous snake. Its bite produces both neurotoxic and cytotoxic venom. The neurotoxic venom attacks the nervous system, which can cause respiratory failure and lead to death if left untreated. The cytotoxic venom affects cell integrity, causing necrosis.   These snakes are considered highly dangerous, but they do serve an important ecological purpose.   Due to their particular taste for rodents. They help to keep the rodent population in control within Bangkok and other towns and villages of Southeast Asia and Thailand.