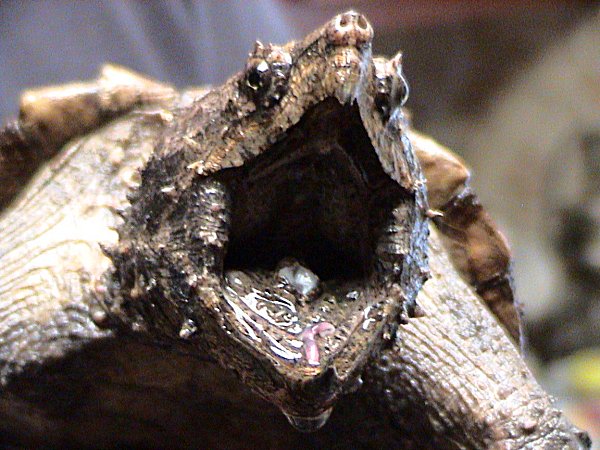 The Alligator Snapping Turtle is characterized by a large, heavy head, and a long, thick shell with three distinct rows of spikes and raised plates on the shell. Their coloration varies between a solid gray, brown, black, or olive-green and often are covered with algae. They have yellow patterns around the eyes to break up the outline of the eye and also camouflage the turtle. Their eyes are also surrounded by a star-shaped arrangement of fleshy filament “eyelashes”.   These turtles are considered as one of the largest freshwater turtles in the world. Typically, these turtles reach lengths between 15.9 to 31.8 inches and weigh from 150 to 180 lbs.   However, specimens as heavy as 250 lbs. have been reported.

Alligator Snappers are opportunistic feeders that are almost entirely carnivorous. They rely on both live food caught by themselves and dead organisms which they scavenge. In general, they will eat almost anything they can catch.   Their natural diet consists primarily of fish and dead fish carcasses but are also known to eat snakes, crayfish, worms, water birds, aquatic plants and other turtles.   They have a unique way to attract prey.   They will sit motionless at the bottom of murky water and let their jaws hang open to reveal their tongue, which looks like a small pink worm-like lure in the back of their gray mouth and literally lures the prey right into striking distance of the turtle’s mouth.