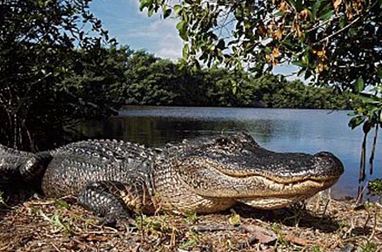 American alligators are only found in the Southeastern United States.   They inhabit freshwater wetlands, such as marshes and cypress swamps from Texas to North Carolina. This species is less tolerant of seawater but more tolerant of colder climates.   In fact, the American alligator is found farther from the equator and is more equipped to deal with cooler conditions than any other crocodilian.  When the water begins to freeze, alligators stick their snouts though the surface which allows them to breathe above the ice.

An alligator can live up to 30 to 50 years. These alligators range from long and slender to short and robust.   In adult male American alligator\’s length averages 11 feet while in smaller females, it averages 8.5 feet.   Adult males may weigh around 500 lbs. while females weigh around 200 lbs.   American Alligators have broad snouts with an average of 74-84 teeth.

They are opportunists and their diet is determined largely by both the size and age of the predating alligator and the size and availability of prey. Most alligators will eat a wide variety of animals, including invertebrates, fish, birds, turtles, snakes, amphibians and mammals, in their life cycle. The fish and other aquatic prey taken in the water or at the water edge form the major part of alligator’s diet and may be eaten at any time of the day or night. Adult alligators also spend considerable time hunting on land, up to 170 feet from water, ambushing terrestrial animals on trail sides and road shoulders. Usually, terrestrial hunting occurs on nights with warm temperatures.

The female builds a nest of vegetation, sticks, leaves, and mud in a sheltered spot in or near the water. After she lays her 20 to 50 white eggs, about the size of a goose egg, she covers them with more vegetation, which heats as it decays, helping to keep the eggs warm.   The temperature at which alligator eggs develop determines their sex.   Those eggs which are hatched at a temperature of 93 °F or more become males, while those at a temperature of 86 °F or lower become female. The female will remain near the nest throughout the 65-day incubation period, protecting it from intruders. When the young begin to hatch the mother quickly digs them out and carries them to the water in her mouth.