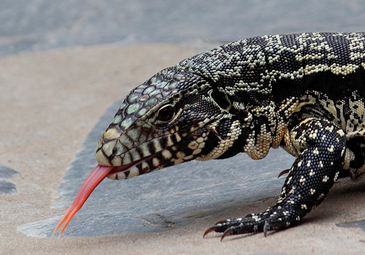 The Argentine black and white tegu is the largest species of tegu. It is also known as the Argentine giant tegu.   It belongs to the teiid family.   Adult males are much larger than the females and can reach 3 feet in length at maturity and continue to grow to lengths of 4-4.5 feet and approximately 8 lbs. The females are much smaller reaching up to 3 feet in total length, from nose to tail. They have beaded skin and linear stripes running down their bodies.   Despite its large size, the Argentinian black and white tegu enjoys a reputation as being quite docile and tame.

The black and white tegus of South America are among the most intelligent and highly adapted of all living lizards. They typically inhabit forest-edge savannahs and adjacent rain forests of Argentina and parts of Brazil and Uruguay. They are largely terrestrial, and spend copious amounts of time in deep burrows which afford protection from dehydration and extreme temperatures.   During cold weather, these tegus will hibernate, generally for about six months from September to March. Though they are terrestrial, Argentine Tegus are excellent swimmers that can stay underwater for long periods of time.

Tegus are large active predators, and will eat virtually any animal they can overpower. They track their prey with their long forked tongue, which transfers scent molecules to the Jacobson’s Organ in the roof of their mouth in a manner similar to snakes. The prey is subdued in the black and white tegu\’s powerful jaws until all struggling ceases. Large food items are ripped apart with the aide of sharp claws; smaller items are swallowed whole.   These tegu\’s are considered to be omnivorous; they will, on occasion eat fruit or plants.

Females deposit 12 to 30 eggs, which they guard jealously. Hatchlings are finger-thick and 7 to 10 inches in length. Black and white tegus often sport brilliant green coloration which gradually fades to tones of black and white as they mature over several years.