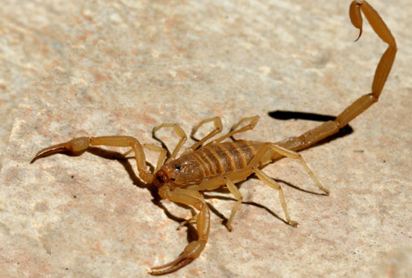 The Arizona Bark Scorpion is most common to the southwest United States and Northern Mexico. There is greater population of this species in the Sonoran Desert.   They typically prefer hiding under rocks, wood piles, or tree bark.

The Arizona Bark Scorpion is the most venomous scorpion in Northern America.   Victims stung by these scorpions experience severe pain, numbness, tingling, temporary dysfunction in the area stung is common, convulsions, and the loss of breath for a short period of time. Due to the extreme pain induced, many victims describe sensations of electrical jolts after being stung.   These dangerous creatures are commonly found in homes, requiring only 1/16 of an inch for entry.   They are also the only species in the southwest that can climb walls, trees, and other objects and prefer an upside down orientation, which often results in people being stung due to the scorpion being on the underside of an object.

The Arizona Bark Scorpion is nocturnal and prefers to ambush its prey, usually feeding on crickets, roaches and other small insects.   They prefer habitats with sufficient moisture and humidity to support insects and other prey species.   These deadly and dangerous creatures also have many predators.   They are preyed upon by a wide variety of animals such as birds, reptiles, spiders, snakes, rodents and other invertebrates.

They are usually a light brown color with males measuring about 4 inches in length and females about 2.75 inches.   They have the notorious tail that is usually kept in a curled position with the stinger on the end, 8 jointed legs and a pair of pinchers that are use for grasping prey and sensing. Like most other scorpions, will glow when exposed to a blacklight.