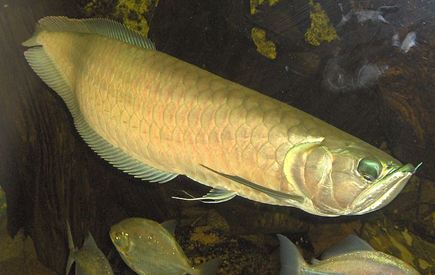 The Arowana is a freshwater bony fish also known as Bonytongues, Water Monkeys and Dragon Fish.   There are ten described living species: three from South America, one from Africa, four from Asia, and the remaining two from Australia.

Arowana are carnivorous predatory fish.   They will often feed off the upper surface of the water by jumping or leaping out of the water. They are excellent jumpers; it has been reported that Arowana Fish have been seen leaping more than 6 feet from the water surface to pick off insects and birds from overhanging branches in South America, hence the nickname “Water Monkeys”.

Their name comes from an Indonesian word, meaning â€œfish of paradiseâ€.