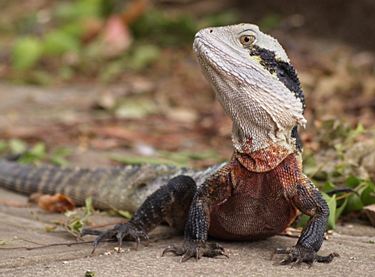 The Australian Water Dragon is native to Eastern Australia from Victoria north to Queensland, as well as a small population in the south-east coast of   South Australia.   As its name suggests, the Australian water dragon is associated with water and is semi-aquatic. It can be found near creeks, rivers, lakes and other water bodies that also have basking sites such as overhanging branches or rocks in open or filtered sun.

This species have long powerful limbs and claws for climbing, a long muscular laterally-compressed tail for swimming, and prominent nuchal (central row of spikes at the base of the head). These spikes continue down the spine, getting smaller as they reach the base of the tail and vertebral crests.

Including their tails, which comprise about two-thirds of their total length, adult females grow to about 2 feet long, and adult males can grow slightly longer than 3 feet and weigh about 1 kg. Males show bolder coloration and have larger heads than females.   They are fast runners and strong climbers. When presented with a potential predator, they seek cover in thick vegetation, or drop from an overhanging branch into water. They are able to swim totally submerged, and rest on the bottom of shallow creeks or lakes for up to 90 minutes to avoid detection.

The Australian water dragon’s diet depends on its size. Juveniles and yearlings tend to feed on small insects such as ants, spiders, crickets, and caterpillars. When they get bigger, so does their prey. An adult diet includes small rodents such as baby mice, although insects are still the most commonly consumed.

Females lay 6 – 18 eggs in a burrow about 3.9â€“5.9 inches deep.   The nest is usually in sandy or soft soil, in an area open to sun. When the mother has laid the eggs, she backfills the chamber with soil and scatters loose debris over it. Australian water dragons exhibit temperature-dependant sex determination; the sex of the hatchlings is determined by the temperature of the nest site.