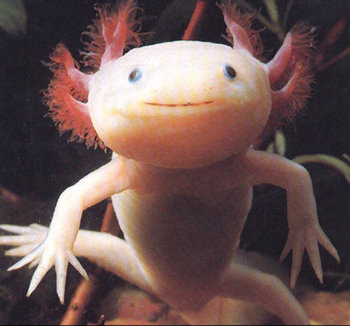 This salamander is a remarkable creature. It intrigued the ancient Aztecs because of its strange looks and regenerative powers and was believed to be a manifestation of the god Xolotl, who like Charon in Greek mythology, was the ferryman of the dead to the underworld. To the Aztecs, the salamander’s regenerative  power was like that of the lake system that sustained them.

Most salamanders are able to regenerate body structures to some extent. But the axolotl is unique in that it can regenerate not only limbs, but also its jaws, spinal cord, and more. After these body parts regenerate, there is no evidence of scarring. Axolotls can even receive transplanted organs from other individuals and accept them without rejection.  They are one thousand times more resistant to cancer than mammals. This, of course, has made them of great interest to scientists who study them in captivity.

The axolotl is also one of the few animals that exhibit neoteny, that is, it retains its juvenile characteristics, such as the external gills, which gives the creature its cute looks.

But this animal, despite its “smile,”  has a lot to be unhappy about. Its only habitat is the canal system of Xochimilco in Mexico, which is what is left from what was an extensive lake and canals that connected most of the Aztec settlements of the Valley of Mexico. These canals, along with artificial islands called chinampas, attract tourists and other city residents who ride on colorful gondola-like boats around the hundred or so miles of canals. This canal and chinampa system, as a vestige of the area’s pre-Hispanic past, has made Xochimilco a World Heritage Site.

Unfortunately the canals are polluted with both garbage and fecal matter, as well as industrial fertilizers. Other problems include the damage by introduced plant and animal species. Carp and tilapia fish, for example, introduced in the 1960s, eat the eggs of the axototl.

The axolotl faces long odds for survival. It seems that only a complete regeneration and clean up of the historic canals will save this animal that is often considered a metaphor for the soul of Mexico.

Pic and Info By http://frogsaregreen.org/