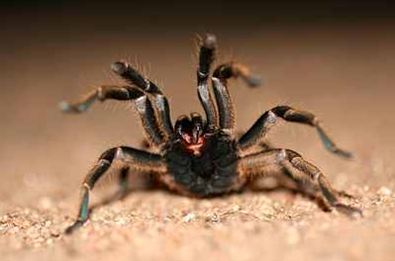 The Baboon Spider is spider species related to the tarantula.   These spiders are native to the continent of Africa.   They are found in a variety of habitats such as dry acacia scrubland, grassland or savanna woodland. In arid regions their burrows are usually deep to provide them protection from high temperatures.

These dangerous spiders have large venomous fangs that can inflict a nasty bite.   They venom consists of a neurotoxin which, in humans, produces extreme pain at the bite site, vomiting, signs of shock and difficulty walking.   When alarmed, they will throw their front legs backwards exposing their fangs and some even make a hissing sound.

These creatures are unusually large, between 13 to 90mm.   They coloration varies between brown, grey, yellow and black but they all have hairy bodies.   They spend their time on the ground, constructing silk-lined burrows under rocks. Usually, the silk forms a rim around the opening.   They hide in their burrows during the day and the entrances are frequently silk covered during the day by a thin, transparent cover.

The Baboon Spider is a nocturnal ambush predator.   They typically prey on a wide array of insects, including crickets, cockroaches, moths, butterflies, and even other spiders.   They have been know to also attack small vertebrates, such as lizards, frogs, mice, snakes.

Once they inject the venom into their prey, they will drag the prey into their burrow.   Spiders consume only liquid food.   Their venom is like digestive juices, breaking down the food into liquid before consumption.