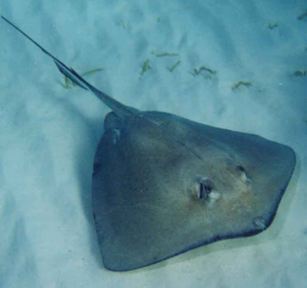 The Bat Stingray is an eagle ray found in muddy or sandy sloughs, estuaries and bays, kelp beds and rocky-bottomed shoreline in the eastern Pacific Ocean, between the Oregon coast and the Gulf of California. It is also found in the area around the GalÃ¡pagos Islands. They are different than your typical stingray in that live in open water rather than on the ocean bottom in shallow water.

Typically, these creatures grow to between 20 to 30 lbs.   There are extremely large specimens, measuring almost 6 feet in length and a massive 200 lbs.   These vary slightly in color, but you will see them as light brown to black with white bellies.   Bat rays have a life span of about 23 years. These rays are known for their ability to jump out of the water and skim along the surface.   Bat rays have one to three venomous barbed spines at the base of their long tails, but these docile animals sting only to defend themselves or when frightened.

Bat rays feed on mollusks, crustaceans and small fish on the seabed, using their bat like wings (pectoral fins) to move sand and expose prey animals. They may also dig trenches up to 20 cm deep to expose buried prey, such as clams. Bat ray teeth are flat and pavement like, forming tightly-packed rows that are used for crushing and grinding preyâ€”the crushed shells are ejected and the flesh consumed. These teeth fall out and are replaced continuously.

Bat Rays are not considered an endangered species, but there has been an increase in sport fishing for these creatures because of the fight they put out when caught.   While these animals are not commercially fished in the United States, they are in Mexico.