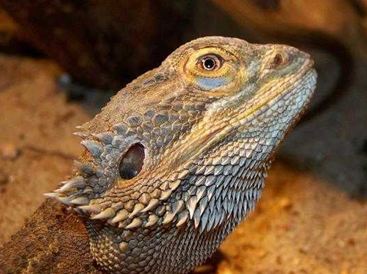 Although this species is most commonly referred to as the Bearded Dragon, it\’s officially known as a Pogona.   Their characteristics include spiny scales arranged in rows and clusters. These are found on the throat, which can be expanded when threatened, and at the back of the head. These spiny scales are used to scare off predators, yet they are not very sharp. The species also displays a hand-waving gesture; this is to show submission between dragons. They also have a head-bobbing act to show dominance. They have the ability to change color during rivalry challenges between males, and in response to temperature changes and other stimuli, such as turning black to absorb heat. They can grow to the size of about 12 to 18 inches.

Bearded Dragons live in the arid, rocky, semi-desert regions and dry open woodlands of Australia. They are adept climbers, spending time on branches and in bushes and near human habitation. Pogona species bask on rocks and exposed branches in the mornings and afternoons.     Bearded dragons, like bears, hibernate during the colder months. This seasonal behavior is called brumation.

During brumation, bearded dragons will not eat.

Female dragons can store sperm, and she usually lays between 5-9 clutches of eggs per season from just one mating. Each clutch can have between 30-60 eggs…and each baby bearded dragon will eat between 50-100 crickets per day!