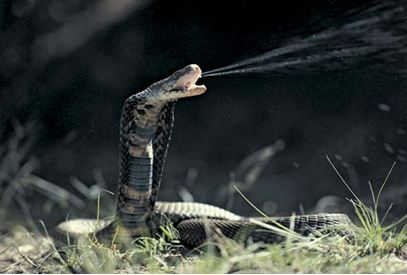 The Black and White Spitting Cobra is also known as Indochinese spitting cobra or Thai Spitting Cobra.   It is found in Southeast Asia, including Thailand, Cambodia, Vietnam, Laos and Burma. It occupies a range of habitats including lowlands, hills, plains, and woodland.   It can also be found in jungle habitat and it is sometimes attracted to human settlements because of the abundant populations of rodents in and around these areas.

This is a medium-sized cobra with a rather thick body. The body color of this species is variable from grey to brown to black, with white spots or stripes. The white patterning can be so prolific that it covers the majority of the snake. Adults average 3 to 4 feet long, but in a few rare cases, they can get to 5 feet long.

It is a primarily nocturnal species. Interestingly, it shows variable temperament depending on the time of day it is encountered. When threatened during daylight hours, the snake is generally timid and seeks refuge in the nearest burrow. However, when the snake is threatened at night, it is more aggressive and is more likely to stand its ground, rear up and display its hood and spit out its venom.   If spitting venom doesn’t work, it will strike and bite as a last resort. When biting, this species tends to hold on and chew savagely. It usually feeds on rodents, toads, and other snakes.

Like most other spitting cobras, its venom is primarily a postsynaptic neurotoxin and cytotoxin (tissue-death).   Bite symptoms include pain, swelling and necrosis around the wound. The bite of this snake is potentially lethal to an adult human.   Anti-venom is required to save the victim.   If the snake spits venom into the eyes of an individual, the individual will experience immediate and severe pain as well as temporary and sometimes permanent blindness.