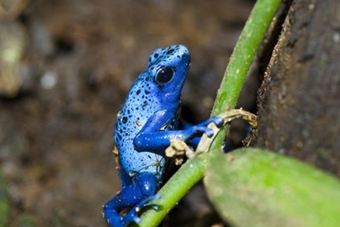 The Blue Poison Dart Frog is found in patches of relictual rainforest surrounded by grasslands in the Sipaliwini savanna area of southern Suriname and Brazil. It is thought to have become trapped in these areas as the original forest turned to grassland during the last ice age. Within the forest, the blue poison dart frog is found on the forest floor. It frequents damp areas close to streams but is a poor swimmer and is never found in the water.

The blue poison dart frog is bright, cobalt or sapphire blue with black and occasionally white mottles. It grows to be about two inches long and has a characteristic hunched back. The feet have four unwebbed toes with suction pads on the ends. Females are slightly larger and plumper than males. Their skin contains poisonous alkaloids.

Blue poison dart frogs eat mainly insects such as beetles, termites, caterpillars and especially ants, although they will also eat spiders and arthropods such as woodlice. The poisonous alkaloids in their skin are absorbed from the ants. In captivity the frogs eat mainly crickets and fruit flies and will lose their toxicity.

Adult frogs are active during the day and the males are aggressive towards each other, defending small territories. Males and females can make a soft calling noise and males have been know to wrestle over territories. Females lay a small batch of up to 10 eggs in damp moss or under a log. The male then defends the eggs and keeps them moist with urine. When the eggs hatch he carries the tadpoles to a pool of water on his back. The female lays unfertilized eggs in this pool to feed her brood.

A successful captive breeding program has helped protect the species in the wild, but it is still one of the rarest and most threatened of the poison dart frogs.

Photo courtesy of Greg from Fotolia.com