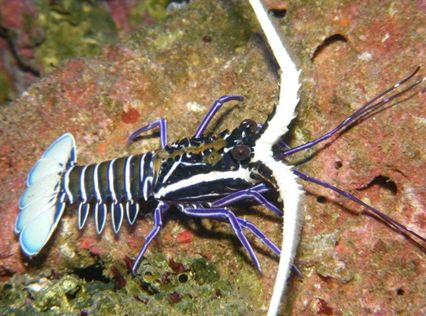 The Spiny Lobster is also referred to as Painted Rock Lobster.   These creatures are native to the shallow tropical waters of the western Pacific and the Indian Ocean.   This species is the most common lobster found in Sri Lanka.   These lobsters spend their days in small caves and crevices in reefs or under coral.   Generally, they are found in water depths of about 49 feet.

The Spiny Lobster averages a length of about 12 inches, but specimens can get as long as 16 inches.   Their coloration is usually a combination of horizontal bands consisting of white, pink, black and brown in a reticulated pattern.   But they are famously characterized by their very distinctive markings of azure blue stripes on its body and legs and the bluish green tails.   These lobsters have five pair of legs but do not have claws.   Their antennae are long and white.   They are considered to be semi-aggressive and usually do not tolerate each other, hence living solitary lives.

These lobsters will venture out at dusk and hunt for prey during the night and early morning hours.   These creatures are both scavengers and omnivorous. They will eat almost anything they come across including algae and other plant material, but regularly prey on carrion, arthropods, other crustaceans and small fish.