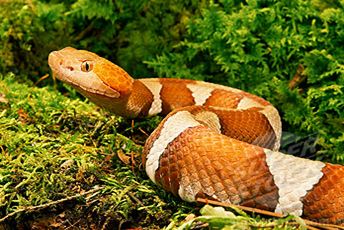 This form is typically a light tan in color, with darker brown, wide cross bands – which gives it its common name. The actual color varies, by locality, from a red-brown, to a gray-brown.   They average approximately 2 – 3 feet in length, considered to be one of the smaller copperheads.     Copperhead venom is not considered to be life-threatening to an otherwise healthy adult, but it can cause localized swelling, necrosis, and severe pain. Any bite from a venomous snake should be considered serious and medical treatment sought.   When the Broad-Banded Copperhead is disturbed or feels threatened, it will often coil up its body, and raise its head at a 45-degree angle from the ground in a defensive posture. It will often vibrate its tail when disturbed as well. The Broad-Banded Copperhead is born with the ability to bite and inject venom, and is fully capable of inflicting a venomous bite from birth.

Secretive and nocturnal, it prefers lightly wooded habitats, typically with a good amount of ground debris for cover, not far from a permanent water source. It typically avoids regions with a significant population of humans. It is an ambush predator, eating lizards, frogs, and rodents, with juveniles having a taste for various kinds of insects, such as cicadas.