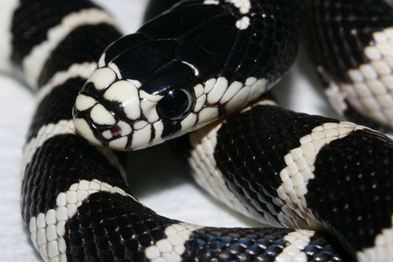 The California King Snake is found in the western United States (California, Nevada, Utah, Arizona, Oregon) and northern Mexico.   They have a wide variety of habitats, but the largest population are in mountains.

These snakes reach an average length of 3.5 to 4.5 feet, some many exceed those lengths.   They can vary widely in appearance due to numerous naturally occurring and captive-developed color morphs.

The Californian king snake is generally diurnal, but they become more nocturnal if the weather is too hot.   In the winter, they will usually go deep underground and enter a hibernation-like state called brumation (slowed metabolism and reduced activity).   When disturbed, California king snakes will often coil their bodies to hide their heads, hiss, and rattle their tails, which, if done in dry vegetation, can produce a sound somewhat resembling that of a rattlesnake’s rattle. They are considered harmless to humans.

California king snakes are opportunistic feeders, feeding on almost any vertebrate they can overpower. Common food items include rodents, other reptiles, birds, and amphibians. All king snakes are non-venomous, but are powerful constrictors and generally kill their prey through suffocation. The “king” in their name refers to their propensity to hunt and consume other snakes, including venomous rattlesnakes.

Females will lay a clutch size of five to twelve eggs with an average of nine, though clutches of 20 or more eggs are known. The hatchlings usually emerge about 40â€“65 days later, and are approximately eight to thirteen inches in length.