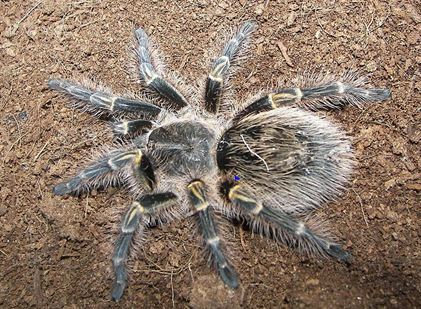 The Chaco Golden Knee Tarantula may also be known as the Chaco Golden Striped Tarantula or Chaco Tarantula.   These creatures are native to Argentina, Uruguay, and Brazil.   They live in burrows that may be self made, but also may be abandoned rodent or lizard burrows.   The burrows are usually hidden under rocks or fallen logs.

It is quite flashy in appearance, bearing long light-colored hairs all over its body and gold stripes on its legs, particularly at the “knees” or joints.   Their body color is usually a black or dark brown.   These creatures are one of the larger tarantulas.   They can reach lengths of approximately 8.5 inches. They have urticating hairs that they throw when it feels threatened.

The Chaco Golden Knee Tarantula diet consists of crickets and other large insects such as lobster roaches, but have also been known to eat small geckos.   They do not build webs to catch their prey, but rather hunt down their victims.   The tarantula holds its prey with its pedipalps (front limbs) and injects it with venom delivered via two hollow fangs. This venom has a double purpose, paralyzing the prey, as well as beginning digestion.   Once the venom has acted, the tarantula is able to suck up the proteins and fats of its prey, leaving just a small ball of undigested body parts.