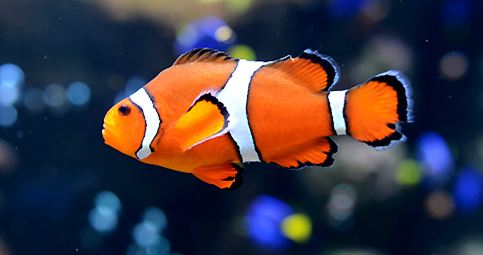 Clownfish may also be referred to as Anemonefish.   These creatures are native to warmer waters of the Indian and Pacific oceans, including the Great Barrier Reef and the Red Sea. While most species have restricted distributions, others are widespread. Clownfish live at the bottom of shallow seas in sheltered reefs or in shallow lagoons. There are no clownfish in the Atlantic, Caribbean or Mediterranean.

Clownfish have a symbiotic relationship anemone.   They will take up residence and nest among the tentacles of the anemone.   Before they move into an anemone home, they will gently touch its tentacles with different parts of their bodies until they are acclimated to their new home. The Clownfish have a layer of mucus on their skin that makes them immune to the anemone’s lethal sting. In exchange for safety from predators and food scraps, the clownfish provides protection to the anemone from predators and will remove algae and parasites from the anemone.

Everyone seems to recognize these Clownfish as Nemo from â€œFinding Nemoâ€.   Typically they are bright orange fish with three white stripes, one at the head, middle and tail.   These white bands are outline in black and the fin and tail tips are black.   There are some species of Clownfish that are blue and yellow.   These fish grow to about 2 to 5 inches in length with males being much smaller than females.

Surprisingly, all clownfish are born male but have the ability to become female. There can only be one dominate female in a group.   If the female dies or disappears, then the largest male would become the dominate female.   The change is irreversible.