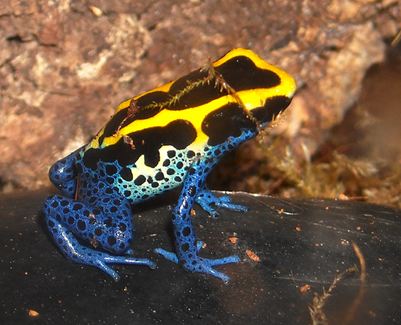 The Cobalt Poison Dart Frog is also known as the dyeing poison frog.   Local tribes would pluck feathers from the back of young parrots and the frogs are rubbed on the parrots’ exposed skin. When the feathers would regenerate, the toxin caused them to appear yellow or red rather than green. These altered feathers are highly prized by the indigenous tribes.   The cobalt frogs are distributed throughout the eastern portion of the Guiana Shield, including parts of Guyana, Suriname, Brazil, and nearly all of French Guiana.   They exist in discrete patches throughout this region, being restricted to “highland” (up to 1,150 ft) areas.

The cobalt poison dart frog is large for a poison dart frog, reaching 3.5 to 5.5 cm long.   Some morphs of this species may exceed 7 cm long.   Typically, the body is primarily black, with an irregular patter of yellow or white stripes running along the back, flanks, chest, head, and belly. In some morphs, however, the body may be primarily blue, primarily yellow, or primarily white. The legs range from pale blue, sky blue or blue-gray to royal blue, cobalt blue, navy blue, or royal purple and are typically peppered with small black dots.

Thy are a mildly toxic species of poison dart frog. It produces pumiliotoxins which the frog uses for self-defense. The poison is sufficiently toxic to discourage most animals from feeding on them.