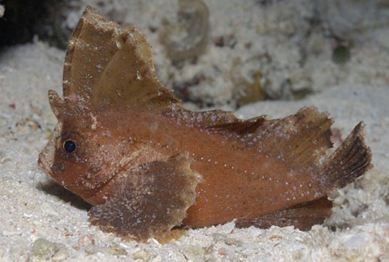 The Cockatoo Waspfish is a small fish with a long list of aliases, such as Leaf-Fish, Dwarf Lionfish, Shortfin Turkeyfish, Roque Fish and Rouge Fish.   These fish are native to the tropical West Pacific Ocean, from Malaysia to Japan and from Indonesia to Australia.   They inhabit water depths from 2 to 60 feet on sandy, silty or rubble bottoms, and also in fields of sea grass.

As harmless as these tiny creatures lookâ€¦they are not!   They have a long dorsal fin that resembles a cockatoo crest when it is spread out, and it is venomous.   The barbs in their dorsal spine will produce a very painful sting.   Their bodies are elongated and laterally compressed.   These fish reach an average length of about 6 inches.   Their coloration varies from cream to a dark brown.   They have a distinct white stripe along the leading edge of the dorsal fin and down the snout to the upper jaw.   Some specimens may have random lines and blotches as well.   They don\’t usually swim very much.  They move around the ocean floor using their pectoral fins.

The Cockatoo Waspfish is a very clever nocturnal predator.   They mimic a crumpled dead leaf or a drifting piece of seaweed and when prey come close enough, they are devoured.   These fish generally feed on small shrimp and other tiny crustaceans but also have a reputation for being cannibalistic.