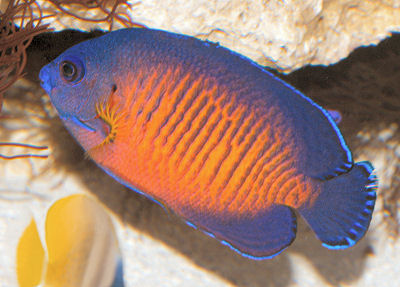 The colorful Coral Beauty  Centropyge bispinosa  is a very popular dwarf angelfish. Reaching only 4″ (10 cm) in size, it’s a “fun-size” color version of a large angelfish species, like the  Bluegirdled Angelfish, but without the stringent care requirements. Besides being small and attractive, it is hardy, reasonably priced and readily available. In fact, this is the most commonly purchased dwarf angel in the marine aquarium hobby, second only to theFlame Angelfish. It is also called the Twospine Angelfish and Dusky Angelfish.

The Coral Beauty is an attractive fish that varies in its intensity of coloration and patterning, depending on where it was collected in the wild. They are typically red or orange with dark bluish striping and a purplish head and fins. But some are blue all over while others can be orange, pale yellow, and even white. On these the vertical dark lines may be reduced in intensity, as may the purplish blue on the head and fins. A beautiful red-blue combination is a common import from the Philippines. Unlike larger angelfish, colors in these angelfish do not fade as they age.

This is a hardy pygmy angel that is generally resistant to disease and a relatively peaceful fish. The Coral Beauty is as intelligent as the larger angelfish and will only be a terror if kept in a smaller tanks where it feels it must defend its little piece of the reef. It can be kept in a spacious community aquarium with fish of a similar size and disposition, and lots of hiding places. They do very little or no harm to invertebrates, although they may be inclined to occasionally peck at tubeworms or coral polyps. It is generally better behaved with corals than other  Centropyg  e dwarf angels. An individual may nip at LPS and clams, but if they are properly fed they will often ignore corals. According to one source they control many types of growth including certain species of diatom algae;  Ulva  , some species of  Derbesia,  andEntermorpha  .

Info and pic by http://animal-world.com/