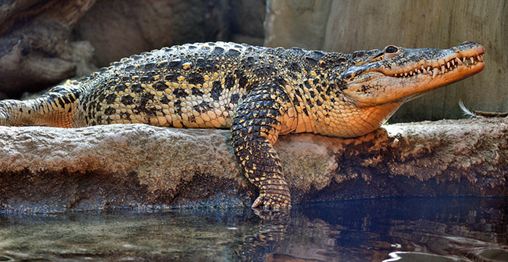 The Cuban Crocodile is a small species of crocodile found only in Cuba\’s Zapata Swamp and the Isle of Youth, and are highly endangered, though it formerly ranged elsewhere in the Caribbean.   They favor freshwater habitat such as swamps, marshes, and rivers and rarely swims in salt water.

Typical adults were found to have measured 6.9â€“7.5 feet in length and to have weighed 150â€“180 lbs.   Large males can reach as much as 11 feet in length and weigh 470 lbs. or more.   This species has numerous interesting characteristics that set it apart from other crocodilians, such as its brighter adult colors, rougher, more ‘pebbled’ scales, and long, strong legs. This species is the most terrestrial of crocodiles, and also possibly the most intelligent.   A colony of this species at Gatorland, Florida has also exhibited what is strongly suspected to be pack-hunting behavior.

Adults of the species feed upon small mammals, fish, and turtles. They have 66-68 teeth and blunt rear teeth, which aids in crushing the shells of their turtle prey. Cuban crocodiles also demonstrate the jump feeding technique. By thrusting with their powerful tail, they can leap from the water and snatch small animals from overhanging branches. The Cuban crocodile, while not a particularly large species, is often regarded as the most aggressive New World crocodile and is behaviorally dominant over the larger American Crocodile in areas in which the two species coexist.

This species dig hole nests if possible, but will create mound nests if no suitable excavation area is available. The exact number of eggs per batch depends on the size and age of the individual female, but the average is 30-40 eggs. Each egg is roughly 2-3 inches in length. The temperature in the nest will determine the sex of the offspring. The incubation length is normally 58-70 days. A large percentage of both egg and hatchlings gets eaten by mammals, reptiles or birds. Cannibalism does occur in this species.

The Cuban Crocodile is an endangered species.   Its restricted habitiat and range make it very vulnerable. Humans have hunted this species to near extinction.