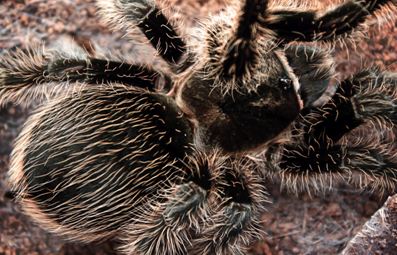 The Curly Hair Tarantula is also known as the Honduran Curlyhair.   Its native range includes Central America, from Honduras to Costa Rica.   A burrowing species, the curlyhair tarantula is found in tropical scrubland, either around the base of large trees, near rivers, or in patches of cleared rain forest.

The Curlyhair tarantula is a plump-bodied spider, covered with light brown, dark brown or bronze hair, some are covered in black hair. It has a golden-bronze sheen due to longer gold hairs that cover the whole body, which are particularly dense on the hind legs.   Males are often a lighter bronze color than females

Primarily a nocturnal, opportunistic ambusher, the curlyhair tarantula preys on insects and small vertebrates. An area on the end of each leg is sensitive to smell, taste and vibration, and is used to detect prey. The tarantula holds its prey with its pedipalps (front limbs) and injects it with venom delivered via two hollow fangs. This venom has a double purpose, paralysing the prey, as well as beginning digestion.   Once the venom has acted, the tarantula is able to suck up the proteins and fats of its prey, leaving just a small ball of undigested body parts. This usually docile tarantula will kick hairs off the abdomen with its hind legs when threatened, which cause blindness if they hit the eyes of a predator and can also cause a rash on the skin.

Female spiders lay 300 to 500 eggs after a several week gestation period. The egg sac is incubated for about seven to eight weeks at 24 to 27 degrees Celsius, after which pale-colored young emerge and cluster together. The spiderlings develop quickly, molting again over the next couple of weeks, by which time they disperse to live independent lives

This species is listed on the Convention on International Trade in Endangered Species (CITES).   It\’s largest threat is the loss of habitat.