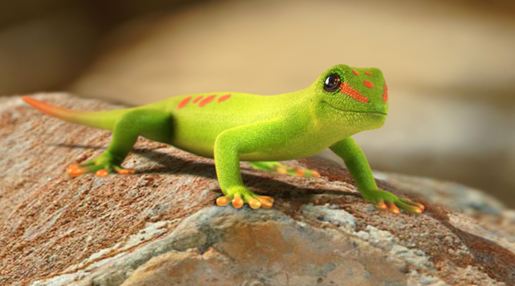 Day Geckos inhabit the islands of the south-west part of the Indian Ocean.   Typically,   they are found in Mauritius and Madagascar. Due to human introduction, they are now also often found on some of the Hawaiian Islands and Florida.   Generally, these tiny creatures inhabit   coconut palms and banana trees, but can also be found near human settlements, in gardens, on fences, houses and huts.

Day Geckos colorations include bright green, with some form of red or orange spots or patterns. Their coloring is designed to camouflage them from predators.   Depending on the species, these creatures reach lengths of 2.6 to 12 inches, which almost half of their length is tail. They have a flattened body with a relatively large head. They have rounded pupils and a clear, fixed plate covering their eyes, instead of eyelids,   which they clean with their tongue.   Day geckos have toe pads that have thousands of microscopic hook-like projections, which allow them to walk on plain vertical and inverted surfaces like bamboo or even glass.   When they have to lift their foot from a surface, they must curl each toe upward to unhook it, causing it walk in a back and forth wiggle.   Due to these hooks on their toes, they can run very fast, but they can distract predators with their tails.   They have tails that break off, which gives them time to escape.

Day geckos feed on various kinds of insects and other invertebrates in the wild. They also eat nectar, pollen and occasionally soft, ripe and sweet fruits such as bananas.

These little creatures are quite vocal.   They can make sounds that are similar to squeaks, clicks and croaking.