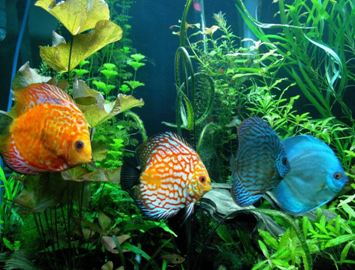 The Discus Fish are sometimes referred to as Pompadour Fish.   They are a species of cichlid freshwater fish   that inhabit the margins of floodplain lakes and rivers in the Amazon Basin of lowland Amazonia. These fish are peaceful and social and typically live together in large schools.

The Discus Fish have a laterally compressed body that has a rounded shape.   It is this body shape that gives these fish their nameâ€¦â€œdiscusâ€. The sides of the fish are frequently patterned in shades of green, red, brown, and blue. There are dozens of color morphs of these fish in captivity.   It is believed that their colors are derived from their diet.   For example, if they eat shrimp, they will exhibit more red colors.   It is believed that some of their colors develop chemically, rather than being chosen by genetics.   These fish usually they have red eyes.   The height and length of the grown fish are both about 8â€“10 inches.

The Discus Fish mainly prey on small fish, fry, larvae, worms, insects and invertebrates.   They have a reputation for taking their time and eating slowly.   They spend of their time searching prey and grazing on algae.

Both males and females with take a role in taking care of the young (called larvae).   Adult discus produce a secretion through their skin, which the larvae live off during their first few days. However when bred in captivity the larvae will tend to live off their parents secretion for up to 2 weeks.