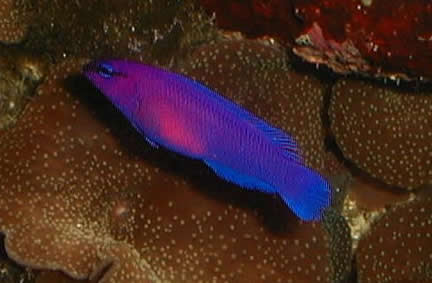 “Dottybacks” is the common name given to the fish that comprise the family  Pseudochromidae. Four sub-families, 16 genera, and over 100 species make up this family, though most dottybacks popular in the hobby are from the  Pseudochromis  genus. This genus also represents the most colorful animals of the family and the one we will concentrate on in this article, with a few exceptions. Their bright colors, along with intriguing personality made them favorites of hobbyists years ago. However, the remote collection locations of most species demanded prices that were higher than what most would be willing to pay. Successful captive breeding of the dottybacks by organizations such as ORA Farms has relieved stress on wild collection practices as well as bringing the price for these beauties into most hobbyists’ reality. Dottybacks of most species are showing up around the hobby as captive bred, making once hard to find species readily available.

All dottybacks are hermaphrodites (Debelius & Baensch, 1994). Since each fish can adopt either male or female sexual organs, adding two like species into a tank together will result in a pair, provided they don’t kill each other first. Unlike clownfish (another hermaphroditic group), the larger of the two dottybacks will be the male. Spawning in the home aquarium is becoming more frequent, especially since more species are becoming more commonly available. The male performs his mating dance outside his cave trying to excite the female. The female will enter the male’s cave, once it accepts the male’s dance. Depending on species, up to 1000 or more eggs are first laid by the female, and then fertilized by the male. The egg sack is negatively buoyant and is adhered to the inside of the males cave. The male then guards the eggs, not allowing the female near them. He will fan the eggs to provide oxygen, and may even pick up and move the eggs to a new location if he feels they are in harm’s way. There have even been occasional reports of the male mouth brooding. After 3 – 6 days the transparent fry hatch from their eggs at roughly ½ the size of a newborn clownfish and are larval for up to 30 days (Ora Inc.). Seven days after laying eggs the female is ready once again, and the cycle is repeated. Raising the fry to adult size is possible, and I would refer you to “Breeding The Orchid Dottyback: An Aquarist’s Journal” by Martin Moe, Jr., for information on the rearing of fry. The information presented in this text is invaluable for those wishing to attempt to raise the fry.

All dottybacks feed primarily on small crustaceans and zooplankton, though some may consume polychaetes and small fish. In the home aquarium you can expect the fish to feed from the water column, accepting most anything meat based. Mysis, brine, plankton, and Formula One â„¢ are good foods to try first and to use as a staple of the diet. When you’re not feeding they will spend some time hunting the live rock for food. They will feed on bristleworms, among other things, making them undesirable to those wanting to keep a diversely populated live sandbed. Among dottybacks, sessile invertebrates are not at risk.

A home aquarium with plenty of hiding places is required for all dottybacks. They are hardy aquarium fish and adapt quickly to captivity. They make their den from small caves and will readily use these to escape the presence of danger. In most cases dottybacks need to be in a tank with mildly aggressive tank mates. Gobies, blennies, small wrasses and other non-aggressive fish will be in danger of harassment, while surgeonfish and triggers will create a more reclusive dottyback. Good tank mates include  Cirrhilabrus  sp. wrasses,  Centropyge  sp. angels, clownfish, damsels, and hawkfish. Be sure to add the dottyback last in all occasions. In some cases, a dedicated species tank might be needed to house them in captivity. Dottybacks have a tendency to be intolerable of tank mates. In addition, most dottybacks originate from 60 feet or deeper, thus they prefer dimmer lit tanks. Today’s S.P.S. tanks are undesirable aquariums for dottybacks due to the bright lights that the corals dictate.

The most sought after and, in my opinion, the most beautiful of the dottybacks is  P. fridmani, also known as the Orchid dottyback or Fridman’s dottyback. It is their bright violet color that attracts most hobbyists, and up until a year or so ago these beauties commanded a price tag near $100. They are collected as deep as 180 feet, though some can be found as shallow as 3 feet. The great depths they inhabit, along with their Red Sea origin, has created their inflated price tags. Thanks to efforts in part by C-Quest and ORA Farms, Orchid dottybacks can now be found for as little as $30. The substantially smaller price for a captive bred animal versus a wild collected animal is a small but important victory for captive breeding.

Info and Pic by reefkeeping.com