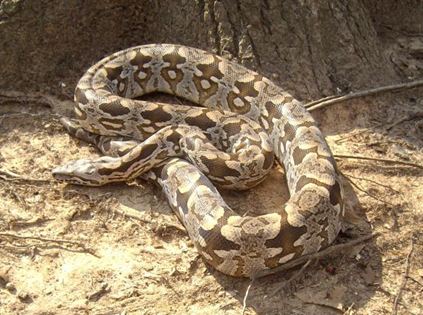 The Dumeril\’s Boa is native to western coast and southwestern regions of Madagascar and the Reunion Island.   These creatures thrive in a semi-arid habitat that gets fairly low amounts of precipitation.   They select areas with arid woodlands and dry forests to make their homes are under fallen logs, piles of leaves, or in burrows dug and then abandoned by other animals.   These snakes hibernate from May through August because these are the coldest months in Madagascar.

These adult boas grow to 6.5 feet in length, with the largest specimen recorded as being 8 feet, 6 inches long. Males usually have longer flatter tails, while females tend to be larger overall.   The color pattern of these snakes consists of a gray-brown ground color with darker patches.   Their colors and patterns are designed to camouflage the snake against the leaf litter of the forest floor of their native habitat.

The Dumeril\’s Boa is a viscous nocturnal predator of small animals, such as birds, lizards, and small mammals. They also have a reputation for preying on other snakes.   These boas are ambush predators, hiding in the leaves on the forest and waiting for prey to cross it\’s path.   Once prey is detected, they explode out of hiding, grab the prey and constrict around it.