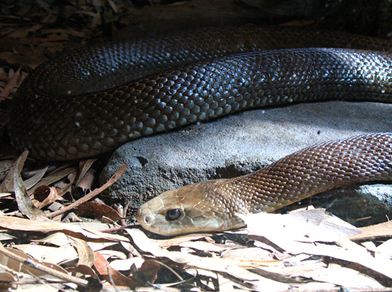 The Eastern King Brown Snake may also be referred to as king brown, mulga snake or Pilbara cobra. This is a species of venomous snake found in Australia.   They will inhabit woodlands, grasslands, scrublands and almost bare or sandy deserts, usually sheltering near humans, under timber, rubbish piles, burrows and deep soil cracks. They are not found in rainforests.

It is one of the longest venomous snakes in the world and the second longest in Australia.   They typically get to about 5 feet in length, but many specimens exceed that length, growing 8 – 10 feet in length.   The average Eastern King Brown will scale between 6.5 – 13 lbs.   Depending on its habitat, these snakes can be of a light brown color in the desert to a dark brown-blackish color in the cooler regions.     They are a robust snake, with a wide heads and smooth snouts.

The Eastern King Brown snake venom consists of neurotoxins.   In small quantities, it is not that toxic, but this snake can inject up to 150mg of venom in a single bite.   Medical attention and treatment with anti-venom is required.

These snakes primarily prey on lizards, birds, mammals and frogs. It is well known to eat other snakes, including all venomous snakes.

Female snakes produce a clutch of around 8â€“20 eggs, which may be laid in a unused burrow or beneath a log or rock. There is no maternal care for the eggs once they have been laid. Eggs take about 2â€“3 months to hatch, after which time the newly hatched snakes must care for themselves.