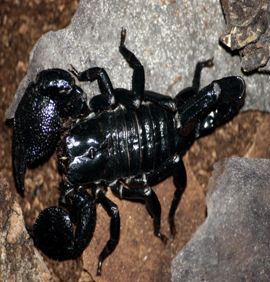 The Emporer Scorpion is a species of scorpion native to Africa. It is one of the largest scorpions in the world and lives for 5 to 8 years. Adults average about 7.9 inches in length. Its body is dark, which ranges from dark blue-green through brown to black. The large pincers are blackish-red and have a granular texture. The front part of the body, or prosoma, is made up of four sections, each with a pair of legs.   They glow under ultraviolet light.   The tail, known as the metasoma, is long and curves back over the body. It ends in the large receptacle containing the venom glands and is tipped with a sharp, curved stinger.

The Emperor Scorpion is an African rainforest species.   This species inhabits both tropical forest and open savannas. The emperor scorpion burrows beneath the soil and hides beneath rocks and debris, and also often burrows in termite mounds.

Emperor scorpions feed on almost anything in the wild, including insects, arachnids, mice and lizards. In captivity they are fed crickets, mealworms, woodlice, butterworms, and pinky mice. The young are fed crushed up pinhead crickets.

The female Emporer has a gestation period of 7-9 months. The young grow in the mother and are born alive, with an average litter of 9-32 young. The young are white at first but become darker after each molt.   The mothers are occasionally cannibalistic and have been known to eat a few of their young.