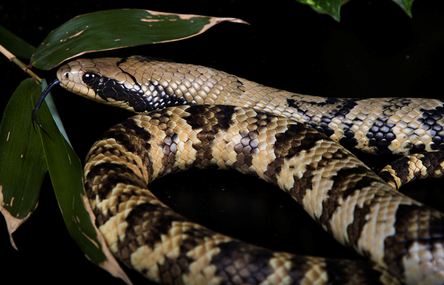 The False Water Cobra is found throughout South America.   It generally lives in wet, humid and marshlands, typically within the tropical rainforests that are common within its range. However, the false water cobra has also been observed in dryer areas, although this is not its preferred habitat. The preference of wet land as a habitat contributes to its common name of false “water” cobra.   You may also find this snake referred to as false cobra, South American water cobra, and Brazilian smooth snake.

The common name False Water Cobra is an allusion to its ability to flatten its neck, similar to a cobra, as a defensive reaction to make it look larger and more intimidating. Unlike the true cobra, the false water cobra stays in a horizontal position when it hoods, rather than rearing into a vertical position. It can also flatten past it\’s neck and lower down the body, which is not possible for a true cobra.   These snakes reach an average length of 6 – 7 feet, but it is not uncommon to find them as long as 9 – 10 feet.   Primarily this snake feeds on fish, amphibians, small mammals, rodents, birds and even other reptiles.

The False Water Cobra is a very active and inquisitive snake, which will spend much of the day climbing, burrowing and even swimming. Their temperaments can vary considerably between specimens; some are very docile and reluctant to bite, while others are very defensive and even aggressive or intimidating.   These snakes are rear fanged (posterior maxillary teeth) and little is known about their venom.   Despite the lack of certainty about the venom, reports of those who have been bitten, reported swelling, tenderness and pain.