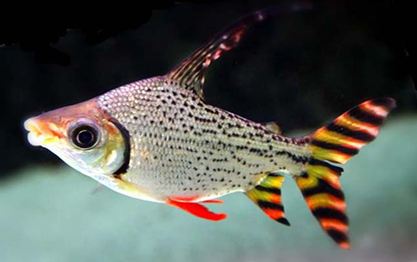 The Flagtail Fish is native to the Indo-Pacific waters.   These fish thrive in variety of habitats, but are most common in tide pools, reef flats, or just shallow water. The adult species seek deeper water were they form schools.   They can live peacefully in large schools, but become aggressive toward each other if in pairs or small groups.

The Flagtail Fish have a variety of colors, depending on the species.   However, they all have compressed and silvery bodies.   Many of them have colorful tails   and fins with stripes on them.   Some species have the black spots on their bodies, while others are pure silver colored.   They have large eyes and a sharp head.   Most of them only grow to 50cm at most, but typically remain small.   The distinctive characteristic of these fish, is a scaly sheath around the dorsal and anal fins. The dorsal fin is deeply notched between the 10 spines and the 9-13 soft rays.   These fish are reported as being very strong swimmers and have a reputation of leaping out of the water.

The Flagtail Fish eat plants and prey on other sea creatures (omnivores).   During the day, they usually swim in schools and then disperse at night to feed on their own.   They are known to be aggressive eaters and can commonly be found feasting on plankton, insects, crustaceans, algae and soft leaved aquatic plants.

The Flagtail Fish is a popular prey of choice for eels and scorpionfish.
Information courtesy of wikipedia.org, fishtankandponds.co.uk, hawaiifishes.com, seriouslyfish.com, monsterfishkeepers.com