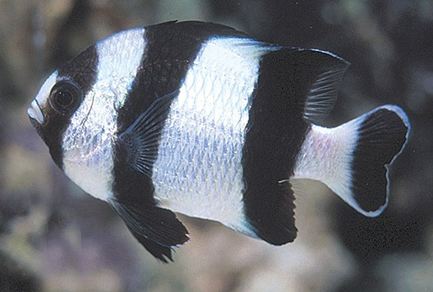 The Four Striped Damselfish are also called as Blacktail Dascyllus, Blacktail Damselfish, or Blacktail Humbug.   These saltwater fish can be found in the Indo-Australian Archipelago and western Caroline Islands including Indonesia, Philippines, New Guinea, and the northern Great Barrier reef of Australia. The are found at depths down to 33 feet.   They are common in sheltered lagoons, harbors and inlets but may also be seen out in the open with outcrops of isolated coral heads. Usually, they live in depths between 3 to 223 feet.

The Four Striped Damselfish get their name from their obvious appearance.   These fish are white with 4 black vertical stripes.   They have a black stripe around the head, one at the front of the body, one at the back of the body and one at the end of the tail.   Their pelvic fins are black and their pectoral fins are transparent. They don\’t grow much larger than four inches in length.

They may appear to be cute little fish, but these fish are extremely aggressive and territorial.   They are known to chase, harass and terrorize fish that are much larger than themselves.   In fact, some captive species have been known to bite humans when their hands are in the tank.

These fish are not picky eaters.   They are known to feast on algae, amphipods, ostracods, copepods, pelagic tunicates, larval shrimps, and fish eggs.   However, they do not prey on invertebrates.