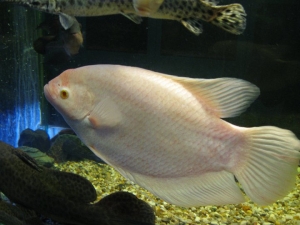 The Giant Gourami  is a stunning fish when it gets large. In their natural environment natives have reported lengths of almost 2 feet (60 cm). It has even been suggested by Vierke (1978) that it can get as large as 2 1/3 feet (70 cm). Now that is one big gourami! Fortunately in captivity they are scarcely over 16 inches (40 cm) and it’s only a rare specimen that reachs close to 18 inches (45 cm). But that is still a good sized fish.

This is the largest of all the labyrinth fishes and in its native countries it is affectionately called the “Water Hog”. It is an active fish with a high metabolism and it eats a lot. They are believed to have originated in Java, and possibly Sumatra, Borneo, and other islands in the Malay Archipelago, but their range is much greater today. They have been introduced into a number of countries throughout Southeast Asia where they are fished and cultured as a delectable food fish. They are also highly prized for use in public aquariums because of their size and ease of care.

These fish are usually sold in sizes of 1 1/2 – 3 inches (4 – 8 cm) in pet stores. When they are small they have a pointed snout, a flat head, and an attractive banded coloration. Juveniles have stripes of a silvery blue/gray to black on a cream to golden/yellow background. As they get older they loose the stripes and turn the color of the fish in the photo above, or sometimes completely black. Adults develop a swollen forehead (especially the males), along with thick lips (more pronounced on females), and a thick chin. Other common names they are known by include Common Gourami and True Gourami.

This is not a difficult fish to keep, but because of its size it will need a very large aquarium and so is generally kept by more experienced aquarists able to provide a large environment. A juvenile can start out in a 30 gallon tank, but an adult will need a minimum sized tank of 200 gallons. If keeping it with other fish an even larger tank is suggested. A well cared for specimen will attain its full adult size in about 4 to 4 1/2 years.

Though these gouramis will grow into a very large strong fish, they make a very personable pet. They will come to know you and some people even report being able to pet their fish. They can be kept in a community aquarium but their temperament with tank mates is changeable. They are usually peaceful with other large fish and adults will usually only become aggressive it their tank is too small. Good tankmates include knifefish, large catfish, and the loricariid (plecostomus) catfish from South America. When raised and kept into adulthood they do “own” their tank. So it’s important to realize that the fish they are raised with will be fine, but new additions are at risk of being killed.

As they are large and active, they will need minimal tank decorations. A good decor includes a dark colored substrate to bring out their colors, a few pieces of driftwood or some rocks, and  some sturdy plants around the perimeter of the tank and floating at the surface. They do eat plants however, so they need to be fast growing species. With its large appetite it will put a heavy load on the water and the filtration. A weekly water change of up to 50% is recommended and needed.