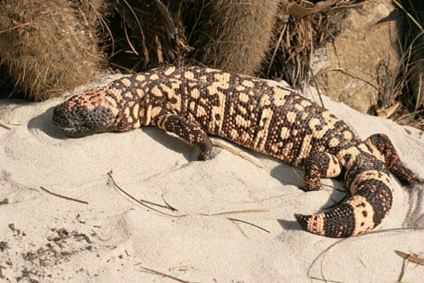 The Gila Monster may also be referred to as Hilo Monster.   These creatures are native to the southwestern United States in States that include Arizona, California, Nevada, Utah and New Mexico and the northwestern Mexican state of Sonora.   The Gila Monster is the only venomous lizard native to the United States and one of only two known species of venomous lizards in North America.   They inhabit scrubland, succulent desert, and oak woodland, seeking shelter in burrows, thickets, and under rocks in locations with ready access to moisture.   In fact, Gila Monsters seem to like water and can be observed immersing themselves in puddles of water after a summer rain.   They avoid living in open areas such as flats and farmland.

The Gila Monster is a heavy and slow-moving lizard.   Typically these animals grow to approximately 2 feet long and weight about   5 pounds.   Their bold coloring consists of a black body with dramatic patterns of pink, orange, or yellow.   The Gila Monster is a venomous lizard capable of inflicting an extremely painful bite.     They will latch on to their victim and chew to allow the neurotoxin venom to get into open wounds from their teeth. A synthetic version of a protein found in Gila saliva is used as a treatment for diabetes in humans.

These creatures primarily prey on eggs raided from nests and newborn mammals. They may spend more than 95 percent of their lives in underground burrows, emerging only to feed and occasionally to bask in the desert sun. Their oversized tails are designed to store fat, allowing them to go months between meals.