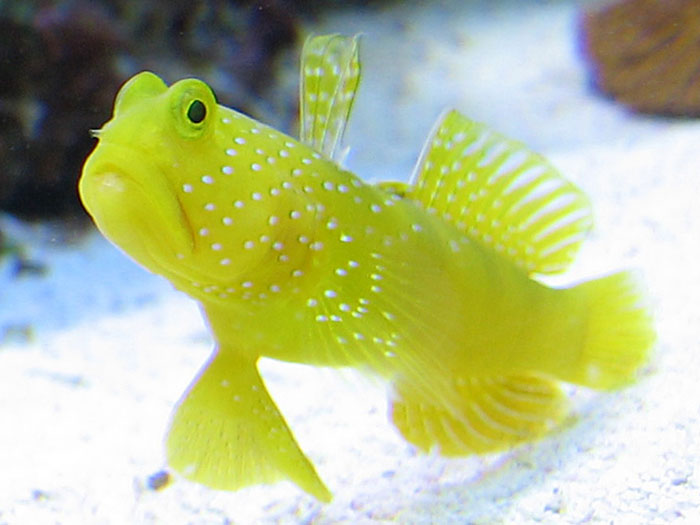 Gobies  are fishes of the  family  Gobiidae, one of the largest fish families comprising more than 2,000  species  in more than 200genera.

[1]
Most of them are relatively small, typically less than 10  cm (4  in) in length. Gobies include some of the smallestvertebrates  in the world, such as  Trimmatom nanus  and  Pandaka pygmaea, which are under 1  cm (3/8  in) long when fully grown. Some large gobies, such as some species of the genera  Gobioides  or  Periophthalmodon, can reach over 30  cm (1  ft) in length, but that is exceptional. Generally, they are  benthic, or bottom-dwellers. Although few are important as food for humans, they are of great significance as prey species for commercially important fish such as  cod,  haddock,  sea bass, and  flatfish. Several gobies are also of interest as aquarium fish, such as the bumblebee gobies of the genus  Brachygobius. Phylogenetic relationships of gobies have been studied using molecular data.

The most distinctive aspects of goby  morphology  are the fused  pelvic fins  that form a disc-shaped sucker. This sucker is functionally analogous to the  dorsal fin  sucker possessed by the  remoras  or the pelvic fin sucker of the  lumpsuckers, but is anatomically distinct; these similarities are the product of  convergent evolution. Gobies can often be seen using the sucker to adhere to rocks and  corals, and in  aquariums  they will stick to glass walls of the tank, as well.