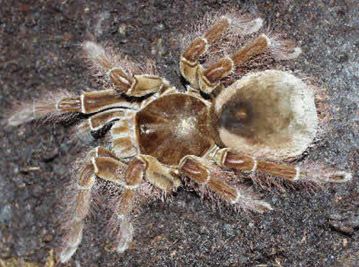 The Goliath is a hairy coffee-colored spider that is large and very stocky with a broad carapace, thick legs, and a large abdomen.   They have a legspan between 10 – 12 inches.   Their extreme size and bulk prevents them from climbing well, so you will not find them in trees.   They are a burrowing species, so they live in humid burrows.   The Goliath Bird-eating Spiders are aggressive and will attack. They are quick and nervous, and will make a hissing noise if they feel threatened, by rubbing the bristles on their legs. Their hissing can be heard up to 15 feet away. The Goliath birdeater has poor eyesight and mainly relies on vibrations in the ground, which it can sense from within its burrow.

These spiders get their name from reports of explorers from the Victorian era who witnessed one eating a hummingbird.   As with other tarantulas, their diet consists primarily of insects and other invertebrates. However, because of its naturally large size, it is not uncommon for this species to kill and consume a variety of vertebrates. In the wild, larger species of tarantula have been seen feeding on rodents, frogs, lizards, bats and even venomous   snakes.

The Goliath Bird-eater Spider will lay about 50 eggs that hatch in six to seven weeks. The spiderlings will stay in the nest until their first molt, and then will be on their own.