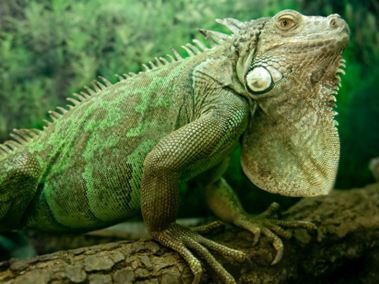 The Green Iguana (also known as the Common Iguana) is a large, arboreal herbivorous species of lizard of the genus Iguana native to Central, South America, and the Caribbean. The green iguana ranges over a large geographic area, from southern Brazil and Paraguay as far north as Mexico and the Caribbean Islands especially in Puerto Rico where they are also known as “Gallina de palo” and they are very common throughout the island where it is seen as an intruder animal from South America; and in the United States as feral populations in South Florida (including the Florida Keys), Hawaii, and the Rio Grande Valley of Texas.

A herbivore, it has adapted significantly with regard to locomotion and osmoregulation as a result of its diet. It grows to 4.9 feet in length from head to tail, although a few specimens have grown more than 6.6 feet with bodyweights upward of 20 pounds.     They feed on leaves, flowers, fruit, and growing shoots of upwards of 100 different species of plant.   However, their diet requires a precise ratio of minerals (2 to 1 calcium to phosphorus) in their diet.

When frightened by a predator, Green Iguanas will attempt to flee, and if near a body of water, they dive into it and swim away.  If cornered by a threat, the Green Iguana will extend and display the dewlap under its neck, stiffen and puff up its body, hiss, and bob its head at the aggressor.   If threat persists the Iguana can lash with its tail, bite and use its claws in defense.   Green Iguanas use “head bobs” and dewlaps in a variety of ways in social interactions, such as greeting another iguana or to court a possible mate. The frequency and number of head bobs have particular meanings to other iguanas.

Green Iguana females lay clutches of 20 to 71 eggs once per year during a synchronized nesting period.  The female Green iguana gives no parental protection after egg laying, apart from defending the nesting burrow during excavation.   The hatchlings emerge from the nest after 10â€“15 weeks of incubation.