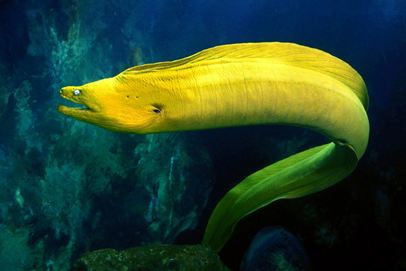 The Green Moray Eel is found in the western Atlantic from New Jersey to Bermuda, and the northern Gulf of Mexico to Brazil.   These eels are found around rocky shorelines, coral reefs, mangroves, tidal creeks, harbors, areas over sand and muddy bottoms, and among seagrass beds. This species stays in waters shallower than 100 feet.

These creatures have a dark to light green coloring with a yellow mucus that covers its body, producing the â€œGreenâ€ in its name.   Typically they are a uniform color and do not have markings and patterns on them.   These eels have smooth edged teeth, but the number of teeth will vary with the age of the specimen.   Adults typically have two rows of teeth in the upper front but only one row in the upper back and lower jaw.   The Green Moray can easily achieve lengths of about 6 feet and will weigh in at 30 lbs., but larger specimens have been reported.

The Green Moray is a nocturnal creature and will forage through small crevices and holes of coral reefs seeking out fish, crabs, shrimp and other small organisms.   It relies heavily on its sense of smell to locate its food in these small places.   During the day, it hides in rocky crevices with its head protruding through the opening.

The Green Moray has been known to attack and bite divers, sometimes while they are feeding them, sometimes unprovoked.   A bite from a moray, especially a large specimen, can be severe and even life threatening.
Green Moray Eels should not be consumed by humans due to ciguatera poisoning.   They develop a toxin from the macro algae and micro algae found on dead corals.   Dining on these eels will give you a serious stomach ache, vomiting and weakness in your arms and legs for several days or weeks.