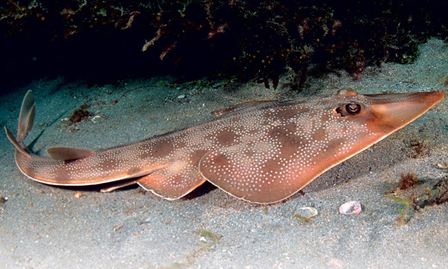 The guitarfish is part of the ray family. These creatures live in various habitats, ranging from tropical, subtropical and temperate waters worldwide. Some occasionally occurs in estuarine and even freshwater habitats.   They often travel in large schools and in depths up to 100 feet.

Guitarfish have a body form that is half shark and half ray. The tail has a typical shark-like form, but in many species the head has a triangular, or guitar-like shape, rather than the disc-shape formed by fusion with the pectoral fin found in other rays.   However, these rays do not have a poisonous spine on their tail.   They swim like sharks usually do, by moving their tails from side-to-side.   Their coloration is ashy gray to olive brown or even a chocolate brown.   They usually grow until they reach about 30 inches in length.

When these guitarfish are not hunting for food, they are buried in the sand or mud (like stingrays).   They feed on benthic (bottom-dwelling) creatures like mollusks such as scallops, crustaceans (e.g. shrimp), and a variety of small fishes.   Ironically, they are preyed up on by larger predatory sharks.

The Guitarfish are listed as Near Threatened (NT) by the IUCN Red List, mostly due to shrimp trawl fishing.