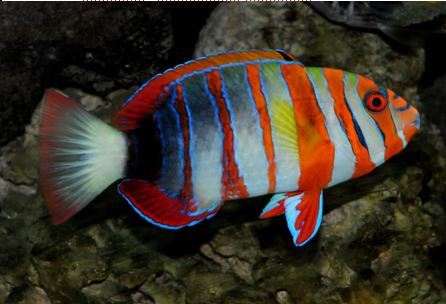 The Harlequin Tuskfish is native to the Western Pacific, from Southern Japan to Australia.

They are a Wrasse Fish commonly found patrolling areas of sandy and coral rubble, in shallow coastal reefs.   Some specimens have been found in small group around caves and overhangs on reef slopes.   Generally, they do not stray too far from the reef.

The Harlequin Tuskfish has a most unique coloration.   They will either have a white or blue body color with red and/or orange vertical stripes.   Their coloration becomes more beautiful with age.   There are some variations in this species that vary with location, but usually it is subtle.   It is reported that specimens acquired from Australia have more striking colors.   It\’s most distinctive feature, is their four sharp, blue protruding teeth.   These fish do not get much larger than 8 inches in length.

They may have a ferocious and vicious appearance, but they are a relatively mild- mannered fish. In captivity, they tend to live peacefully with tank mates, but may be harassed by larger wrasses, angelfish and triggerfish.

The Harlequin Tuskfish is known to prey on most hard-shelled benthic invertebrates, small crab, shrimp and fish.   Their sharp teeth play important role grasping their prey and tearing through the hard shelled exterior.