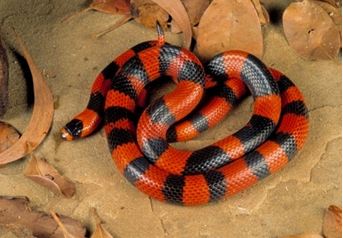 The Honduran Milksnake is a milksnake and as its name implies, originates in Nicaragua, Honduras and even parts of Costa Rica.   They make their home in the rain forests.   Generally hidden under leaf litter,

These snakes have a rapidly growing color morph, primarily bright orange, dull orange, reds, blacks, gray or even pure white.   The colors morphs are creating a high demand for these snakes by collectors and hobbyist.   The original Honduran Milksnake was tri-colored, orange/red, black and yellow or orange bands down the body.   They have a signature â€œMâ€ pattern under the mouth.   As adults, these snakes reach lengths of 3 to 5 feet and some are now exceeding 6 feet.   In the wild, they have a life span of about 12 years, but in captivity they can live over 20 years.

They are nocturnal in the summer and diurnal in the spring and fall and hibernate in the winter.   They are a non-venomous snake but rather a constrictor.   They hunt mice, rats, birds and other small mammals.   Many times, these snakes have appetites larger than stomachs, causing them to regurgitate their food because they are unable to digest the large prey.

These snakes would rather flee than fight, but if cornered they will raise their head and make quick â€œjerkyâ€ movements to flash their colors.   This is all in an attempt to startle the predator and warn them of danger.   Many predators confuse them with the venomous coral snake and will retreat.