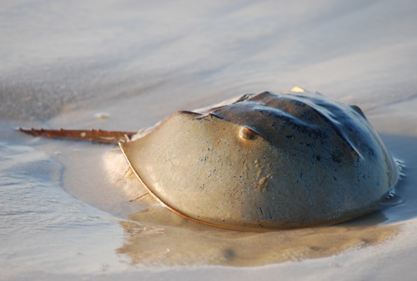 Horseshoe crab are arthropods that live primarily in and around shallow ocean waters on soft sandy or muddy bottoms.   They can be found in the Atlantic Ocean along the North American coastline. They can be seen along the East and Gulf coasts of the United States and Mexico.

The entire body of the horseshoe crab is protected by a hard shell. It has two primary compound eyes and seven secondary simple eyes, two of which are on the underside. Beneath the carapace, it looks quite similar to a large spider. It has five pairs of legs for walking, swimming, and moving food into the mouth. The long, straight, rigid tail can be used to flip itself over if turned upside down, so a horseshoe crab with a broken tail is more susceptible to predation.   Unlike vertebrates, horseshoe crabs do not have hemoglobin in their blood, but instead use hemocyanin to carry oxygen. Because of the copper present in hemocyanin, their blood is blue.

They usually are found on the ocean floor searching for worms and molluscs, which are their main food. They may also feed on crustaceans and even small fish.

They are commonly used as bait and in fertilizer. In recent years, a decline in the number of individuals has occurred as a consequence of coastal habitat destruction in Japan and over harvesting along the east coast of North America. Horseshoe crabs are considered living fossils.