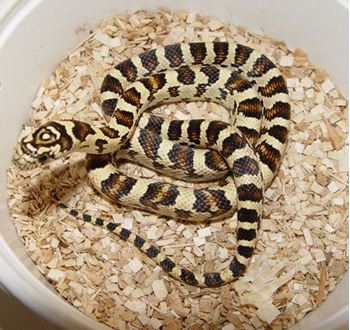 A Hybrid King Snake is a King Snake that has been bred with another species, such as   other kings, milks, rat snakes, corn snakes, bull snakes, gopher snakes and pine snakes. The hybrid offspring of these combinations will be fertile unlike most hybrids.   King snakes can be found from southern parts of Canada, throughout the United States, and in Central and parts of South America.

The majority of king snakes have quite vibrant patterns on their skins.   Colors and patterns vary between the subspecies, but there are many striking and beautiful patterns to be found among these snakes.   Some of these snakes can get pretty large, 6-7 feet in length.   They can have a life span of 15-20 years.

King snakes use constriction to suffocate and kill their prey.   They have a reputation for being an opportunistic predator.   They will prey on other snakes, hence the â€œkingâ€ in the name (as with the king cobra) references its taste for other snakes, lizards, rodents, birds and eggs.   Interestingly, they also prey on other venomous snakes,   immune to the venom of other snakes, including rattlesnakes. In some circumstances, it may not be immune to venom of snakes from different localities.