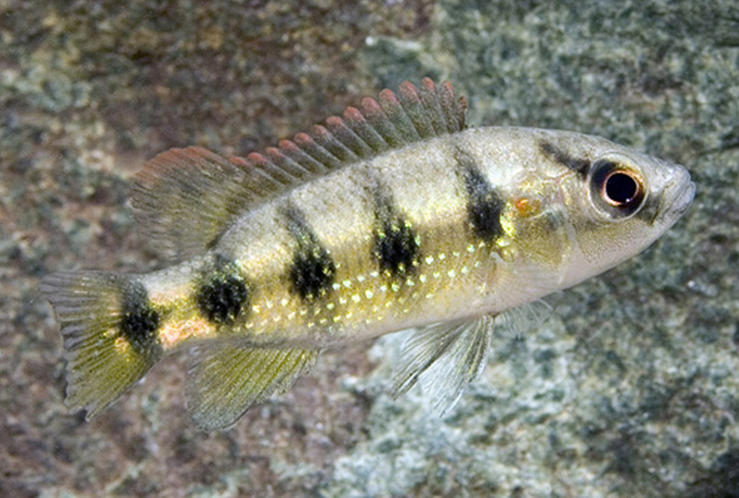 The Five Spot Jewel Cichlid may also be called a Banded Jewelfish or more commonly, the Five Star General.   These fish are native to West Africa where they inhabit rivers, streams and lakes.   Occasionally, they are even found in brackish water.

The Five Spot Jewel Cichlid has a base color of gray or silver with five very distinct black spots down the sides of their body.   These black spots are surrounded by bronze, iridescent scales giving them a glossy appearance.   Males are usually slightly larger and more colorful than females.   An average size for the Five Spot Jewel is approximately 15 to 18 cm.   Their fins are almost opaque and smoky in color and some specimens have tiny red tips on the fins.

Perhaps this fish is best known for it aggressive nature and nasty tempers.   For it\’s size, it is considered to be the most aggressive cichlid.   In fact, in some parts of Africa, these fish are introduced into rivers and lakes to control the tilapia population.   They do best living as pairs, but they must be paired prior to adulthood due to their territorial nature.   In captivity, they require a very large aquarium with plenty of caves and crevices to hide in.

These predatory fish are carnivores and prefer to feed on live food.   They will dig in the substrate looking for other fish, insects or worms.   In captivity, they will also accept frozen food and sometimes dried food.