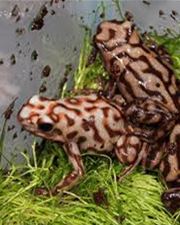 The Kahlua and Cream Poison Dart frog is also referred to as Brown and White Poison Dart frog.   The white is not really a white but rather more like a light brown or cream color.   However, the lighter color on these frogs doesn\’t seem to appear until they reach adulthood, which is at about two years of age.   As juveniles, they are predominately a darker brown color.   These frogs are thought to have originated in western Panama.   Humid and tropical regions are their ideal habitat.

These frogs (and many other species as well) have a shy personality and if kept in a terranium, they may not be seen very much.   In the wild, they are thought to be territorial and live in pairs, usually around the base of a tree.   They use the tree as an escape route if threatened by a predator.

The Kahlua and Cream has basically the same diet as most any other frog.   They use their long, sticky tongues to catch a variety of small insects.   These frogs get their toxicity from their diet in the wild but will lose their toxins in captivity.