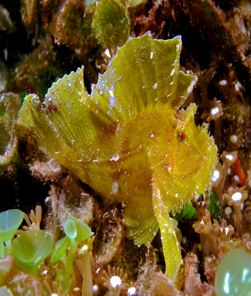 The Leaf Scorpionfish may also be called a Paperfish. These fascinating creatures are   widespread from east African coast and the Red Sea to the tropical Indo-Pacific, up to the Galapagos Islands, the Ryukyu Islands, Hawaii and the coast of New South Wales.   This species can be found in tropical waters on coral reefs, from shallow water to a depth of 130 meters.

These fish grow to about 10 centimeters in length. The color of this fish varies from green, red, pink, brown, orange, yellow and even to a ghostly white. The fish is almost as flat as a leaf and resembles a leaf in many other ways, even swaying in the water like a leaf. Their head and mouth are large with appendages around the mouth, resembling a beard. Their eyes have a dark line running through them.   The large dorsal fin starts just behind the eyes and usually lifted up like a sail. The venom of the leaf fish is considerably weaker than that of the lionfish and stonefish. The skin often has blotches that enhance a camouflage effect. Their skin is prone to have algae and hydroids growing on it.   The growth on the skin cause this fish to molt every 10 to 14 days, and can change colors after the molt.

Leaf Scorpionfish are lurking, waiting until a suitable prey, a small fish or shrimp approaches. Then it slowly moves with its pectoral fins close to the victim. When the leaf fish is close enough, the prey is sucked in by the sudden opening of the mouth. It eats preys up to half its body length.

These fish do not swim, they hop along the substrates to get from place to place.   In captivity, they are noted for being able to recognize their owners.